Last week, IMHI students and alumni had the pleasure of being welcomed to the Park Hyatt Paris Vendome for the third edition of the Industry Leader Conferences, with Michel Jauslin, Area Vice President for Hyatt France. 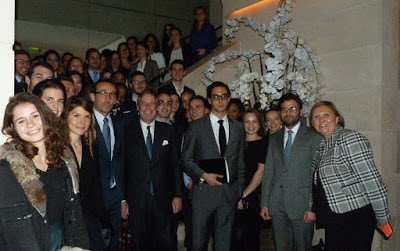 Over the course of the evening, Mr. Jauslin discussed everything from the long path of his career, to the existing supply of Palaces in Paris, and the future of the hospitality industry.

A few items that stood out were some of Mr. Jauslin’s career advice in relation to what one must do as an employee, and what kind of company he should work for. According to Mr. Jauslin, if one works hard and diligently at his job, he should never ask for a promotion; if the firm one is working at is well-structured, and well-designed from a human resource perspective, actions speak much louder than words, and one should be rewarded without ever asking for it. He did, however, stress the importance of perseverance; going as so far as to say he was likely to hire someone who kept applying for the same job after multiple rejections.

As a word of advice to young graduates, Mr. Jauslin spoke about having no geographic restrictions; if something comes up someplace, go for it. Speaking from his experience working across multiple continents, this is not only a great way to accelerate one’s growth, but one’s career as well. According to him, working at the Intercontinential in Abidjan in the Ivory Coast was the best learning experience of his career; there, he not only had to follow the mandate of IHG’s head office, but learned how to apply it within the parameters of the local team, and its customs. Having worked at three firms – IHG, Peninsula, and Hyatt – Mr. Jauslin recommends spending two years at several firms to expand one’s knowledge, before settling down in a company that has a strong sense of culture.


In addition to this geographic flexibility, Mr. Jauslin also stressed the importance of being flexible with one’s time. Any operational role within the hospitality industry is an all-consuming one, much like being a parent. On the personal side, then, it is key that one’s partner is aware, and more importantly, comfortable with the strenuous demands of the job. 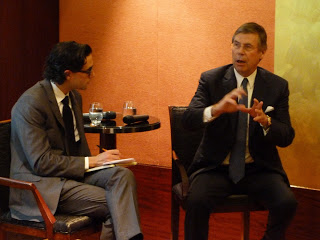 According to Mr. Jauslin, following the attacks of November 13th, all Paris hotels were hit hard in terms of lost bookings. Luxury properties are especially at risk, as their clientele is very sensitive to geopolitical disturbances, and can easily cancel a trip to Paris in favour of one for London. After the Charlie Hebdo attacks, Mr. Jauslin it took the Park Hyatt about four and a half months for business to return to normal. Today, he sees hotels being in what he refers to as an insecurity zone of three years. After these three years, barring any future problems, the market will once again stabilize. Hopefully, this comes sooner rather than later, as, according to Mr. Jauslin, there is an oversupply of luxury hotels in the city – and this will only get worse with the reopening of the Ritz, and the Crillon in 2016 and 2017, respectively. That said, Mr. Jauslin sees strong potential for what he calls “casual luxury” embodied by brands such as W, and Hyatt’s own Andaz. According to him, we’re going also going to see much more customized luxury experiences as opposed to cost-saving standardization; pointing to the example of luxury watches, Mr. Jauslin stresses the importance of individuality and the unique, arguing that luxury by definition is personal.

Needless to say, it was a memorable evening, and with a great of insight on offer from Hyatt’s Area Vice President.
Publié par Anonymous à 15:20

Email ThisBlogThis!Share to TwitterShare to FacebookShare to Pinterest
Libellés : Industry Leader Conferences, Outside the Classroom