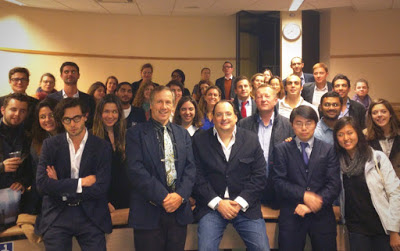 IMHI recently had the pleasure of welcoming Mr. Javier Delgado Muerza, Head of Vertical Search at Google and an alumnus of the MBA in Hospitality Management at ESSEC, for the second edition of the Industry Leaders Conference.

Over the course of his presentation, Mr. Delgado Muerza provided his personal insight into life after IMHI, being part of one of the most successful digital companies in the world, and his outlook on the future of travel research behavior. He touched on subjects such as:

As a former student at IMHI, Mr. Delgado Muerza began the session by expressing that the students present were in fact the focus of his presentation. According to him and despite an impressive career in the digital travel industry, the best years of his life were spent at IMHI, building long-lasting relationships. An interesting fact that Mr. Delgado Muerza also shared was that although his strengths did not necessarily lie in academics, his everlasting passion for the travel industry allowed him to be at the position he is in today.

It is reasonably fair to say that being a part of a digital giant such as Google, especially at a time when technology has embedded itself into our everyday lives, is certainly a sizable accomplishment. In order for us to understand this achievement Mr. Delgado Muerza  spoke about his impressive career in the travel industry starting in Spain, his home country, at Iberia Airlines , followed by successive positions across southern Europe and the UK at one of the digital travel leaders, Expedia. During his time at Expedia Mr. Delgado Muerza was in fact headhunted by Google in order to head a new division, which was dismantled shortly after his arrival at the company, and integrated into Google’s main product, Search. Following this, Muerza was then redirected to the vertical search department of Google, where he is now the department head.

Mr. Delgado Muerza being extremely passionate about the travel industry, believes that this growth is only logical, as the importance of using the internet and new technology is now a major part of our lives (here’s an example: we unlock our smartphones on average 150 times per day.)

According to Mr. Delgado Muerza, in order to accompany their users in these evolutions, Google strives to optimize their tools on a daily basis. An example of this is in Google headquarters itself, where the Engineers not only drive innovation, but are actually in charge of all aspects of the company; for them, usability and customer satisfaction comes first. This was the case for Google Hotel Finder, which was dismantled in spite of its online success. In relation to Google their travel services, when asked whether or not Google could become a major OTA such as Booking.com or Expedia, Mr. Delgado Muerza confirmed that it was not in the company’s future plans. At least for now.

Lastly, with regards to small independent hotels and their bargaining power in paid search as opposed to large hotel companies, Mr. Delgado Muerza confirmed that the algorithms in terms of search results are not only based on monetary paid search, but also on relevance and other criteria in order to give all hoteliers the best chance at capturing business. Nonetheless, it’s clear, however, that in order to strive within the hospitality sector, hoteliers must gain a thorough knowledge of the online world, and how best utilize it.

Personally, I found it refreshing to have an alumnus at the Industry Leaders Conference who was not purely focused on finance, and worked at a digital vanguard like Google – especially since he was from the sales side. Prior to Mr. Delgado Muerza coming to speak to us, the idea of working for a company like Google within the hospitality industry wasn’t obvious. After Mr. Delgado Muerza’s visit, however, the possibility of looking for career opportunities at Google has opened up, and seems more realistic.

Email ThisBlogThis!Share to TwitterShare to FacebookShare to Pinterest
Libellés : Industry Leader Conferences, Outside the Classroom