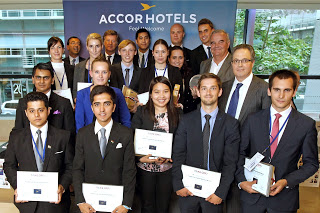 The Accor Takeoff Challenge is an annual innovative competition where university students worldwide are given a real AccorHotel case study to work on. The case study is then evaluated by professors from top universities as well as AccorHotel professionals. For 2015, the topic is Customer Loyalty Program at AccorHotel in 2020.

This year, the IMHI team comprised of Marie Laviolette, Edouard Chandovoine, and I. Since April, we were given different challenges to complete. For Round 1, we submitted a Pinterest-inspired photo collage to create a buzz about our proposal. After we garnered over a whopping 620 votes, we were among the 16 teams (out of 164) to proceed to the next round. For Round 2, we had to produce a video about improving the customer experience of young business travelers. Marie, Edouard, and I roamed the streets of Paris to shoot a split-screen video about two young leisure and business travelers who met and formed a budding romance through their travel experience with AccorHotels. After defending our video to a jury via Skype, we were informed the following week that we were among the top 5 teams going to the finale! 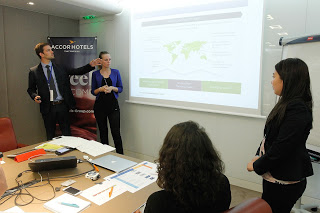 The finale this year took place in Paris. All teams, as well as their school representatives, were invited to stay at the Ibis Bercy Village. On the first day, we were welcomed by the Accor Takeoff coordinators for a light cocktail party. The ambiance was jovial yet intimate as all the team members were thrilled to get to know each other and make travel plans during their stay in Paris. The finalists for the challenge were surprisingly diverse. The students came from many different countries, such as the US, India, Hungary, Germany, Switzerland, and France; and their age ranges from early teens to early-30s.

The following day was the big day!  After being treated to a nice breakfast at the hotel, we arrived at Odyssey, AccorHotel’s headquarter in Paris, where Emanuel Baudart, AccorHotel’s SVP of Customer Expertise & Loyalty, greeted us with the final assignment presentation: What would be AccorHotel’s loyalty program of 2020, including data, customer experience, and [by building a] loyalty program? We were sequestered to a private room and were given two-and-a-half hours to answer this question as well as producing a Powerpoint presentation. The final jury included Fabrice Tessier, Yves Lacheret, Jean-Luc Chétien, Michael Antioco, Laurent Picheral, Isabelle Birem, Michel Rochat, and other executives.

Minutes before presenting our case, my team and I realized that after months of preparation, everything boiled down to 12 minutes of presentation and 8 minutes of Q&A. We reminded ourselves that we were proud to be in the Top 5, and we were just really happy to be there at that moment. We became suddenly more relaxed and as nerve-wrecking stress disappeared, we were ready to present our case. 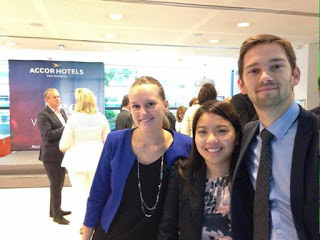 After the jury deliberation, the members of AccorHotel’s executive committee, including CEO Sebastien Bazin, Sven Boinet, and Vivek Badrinath, welcomed all the teams and their school representatives at the award ceremony. The IMHI support team included Cyril, Jeanne, Joelle, Capucine, Laurie, Clement, and Nicolas. Finally, Arantxa Balso, AccorHotel’s Chief Human Resources Officer, announced us as the 3rd place winners for the challenge. We were absolutely delighted, as were the IMHI support team as they cheered for us as we received our award. Afterwards, all the finalists headed off to the Sofitel Paris le Faubourg for a special dinner curated just for us by Chef Yannick Alleno.

On the last day, we were treated to a surprise bateaux mouches ride by Fabrice, Lucia, Sarah, Xinya, and Djibril. All the finalists hung out for one last time and enjoyed the sunny weather and each other’s company. It was a nice and fitting ending to a great journey.  Before we parted ways, we all exchange contacts and promised to hang out in the future.

At the end of the challenge, we were given gifts, such as the new Samsung Galaxy Tablet, 5-year Gold membership status at AccorHotels, a special gift from Accor Solidarity, and a personalized, handwritten thank you note, among other treats. However, I would say the best gift was having such a memorable experience!